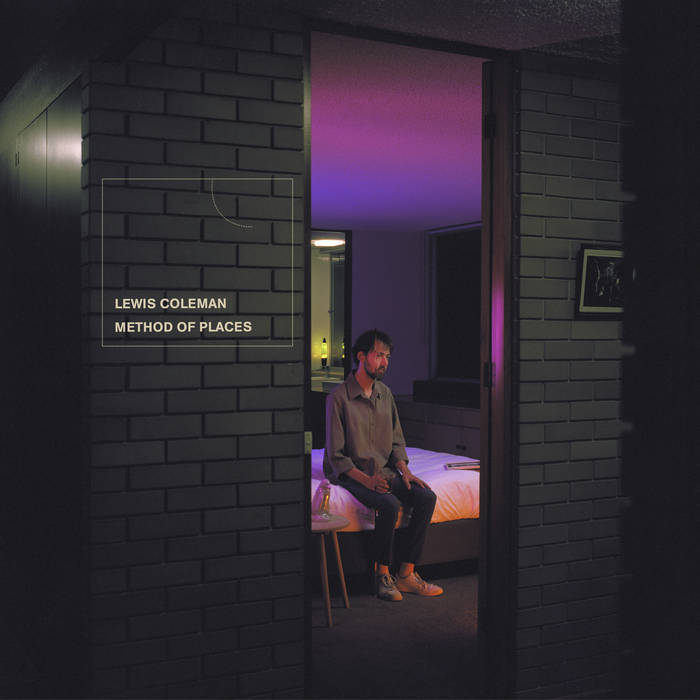 When listening to the debut album, Method of Places, from Melbourne-based musician Lewis Coleman, he suggests it is a kind of Memory Palace. “Music should be interpreted differently by people, you don’t want to force a meaning on to people, but I think it’s important to have something connected to it. When thinking about the album as a whole, I was reminded of this technique people use for remembering collections of things by placing them in imaginary rooms,” Coleman explains. “It’s called the Method of Loci, ‘loci’ meaning ‘places’ in Latin.” And an album title was born.

Written and self-produced across five years, in five bedrooms, Method of Places is a record with a big kind of history in it, both sonically and lyrically. Ask Coleman and he’ll unassumingly tell you that for him each song is a micro-world containing multiple moments in time, each one swimming with memories and pieces of himself that span the last half-decade.

In “Good Side” he is a 15-year-old kid in Year 9, trying on corduroy pants at Savers (Melbourne’s much-loved Mecca for secondhand clothes), developing a personality, finding friends, having crushes. In “Going Your Way” he’s six wines in, a piano stool creaking beneath him as he idly plays the keys. In “Is This Me Now” he’s accidentally out of his mind on hallucinogens, as synths warp and crash around his distant voice, convinced he’s broken his brain forever. “I remember that so vividly,” he laughs. “Like, I’m actually stuck in here. I’m never gonna recover. In reality it was just five hours of hell, but still…”

When taken as a whole, Method of Places becomes a history of his young adulthood up till now. A Memory Palace, where all the songs are different rooms, co-existing under the album’s roof.

It’s the kind of big idea that suits the record. Method of Places follows in the long tradition of rock musicians who have grander musical ambitions for their music than just four chords and 4/4 time. Artists like The Beatles, the Beach Boys, Joni Mitchell, Radiohead and more recently Tame Impala, Weyes Blood and Cate Le Bon. Artists that are constantly searching for unheard musical territories, relentlessly tinkering away, re-working sounds until they feel new.

“I do often sit around and over obsess or worry that what I’ve written just sounds like something else,” Coleman says. “So, I search for a way to mess with it until it sounds like it’s got its own thing. I think I’ve always grown up around people musically that have been conscious of trying to do something differently. I’ve always had that in my head.”

The fruits of Coleman’s labour are on brilliant display on Method Of Places. It’s an album which effortlessly straddles the worlds of indie rock, electronica, jazz and soul, bristling with big ideas and artfully arranged songs that are both abstract and melodic, shifting and morphing around you, pulsing with a hushed intensity, but always grounded by a rhythm section so spartanly groovy that your head can’t help but nod along in assent.

“That groove is really important to me. It’s something I probably absorbed from listening to a lot of the Daptone record label out of New York, Motown, and the greater Melbourne funk/soul community” he says. And it serves as the perfect counterbalance to the more introspective and wounded vocals.

It’s all part of Coleman’s plan. “Tension both rhythmically and harmonically are so important to feeling moved by music because you feel like you’re being pulled somewhere maybe that you’re not fully expecting, but then also somewhere grounding. It unsettles you for a moment, then puts you back together. I think that’s what creates a moving experience,” he says.

While recording the album in his bedroom wasn’t so much a “cool” choice (“It was more about convenience to me,” he says), it did help him capture that real, lived-in warmth. Listening closely, you can hear a lot of ambient sounds left in the mix.

“I love being able to hear a room or physical space someone’s in at a time, not just a complete artificial reverb world. A phone turning off or getting moved, a piano stool creaking, when you can actually hear those kinds of things, it makes it more of a visceral experience.” In fact, the original iPhone demo recording for “Going Your Way” can still be heard throughout the track.

It’s these kinds of details that give the impression of Coleman physically moving around inside the album, his Memory Palace. But while the album is often introspective, Coleman doesn’t want it to feel exclusive, but rather inviting to the listener. “I really hope it isn’t something that’s just in my brain that no one can connect to,” he says. “I would love it to be a world that other people can exist in as well.”

Method of Places is a house of memory, I hope you enjoy walking through it.

All tracks written by Lewis Coleman, except “Animal”, co-written by Henry Jenkins

All vocals and instruments performed by Lewis Coleman, except:

Recorded at home in Naarm/Melbourne between 2014 - 2019
Drums except ‘Animal’ recorded at a Very Cool Studio.
Strings/Woodwind recorded at the Victorian College of the Arts

Endless love to everyone I have made music with, lived with, worked with, laughed with, shared my life with, you are all woven into this in some way.

This record was created on the lands of the Wurundjeri People of the Kulin Nation. It Always was, and always will be, Aboriginal land.

Over the course of a few years, multi-instrumentalist Lewis Coleman has been quietly building a collection of songs; writing, playing, recording and producing them at home in Melbourne

Bandcamp Daily  your guide to the world of Bandcamp